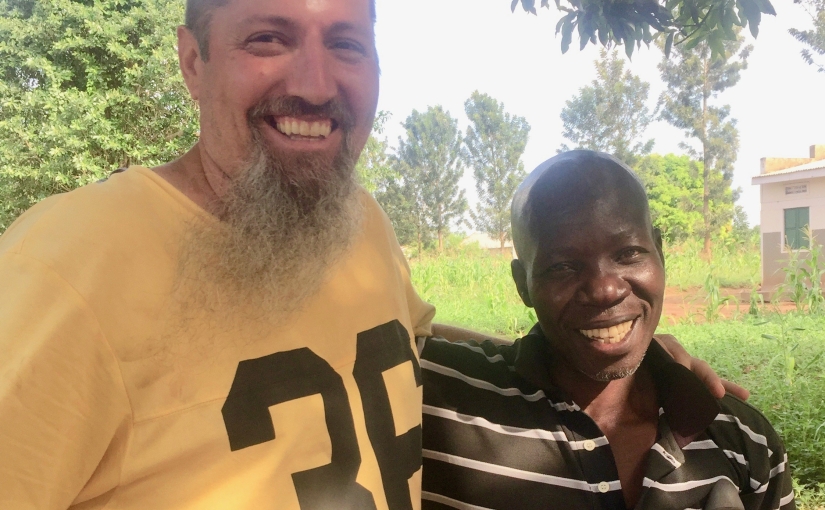 We went to visit Ndianga at his home on Tuesday before he went for his last visit to the doctor who did the surgery in August. He has been going every month to see how his progress is coming along. He and his wife were so happy we came to see them, she brought out enough food to feed about eight Americans – we do not eat as much as they do! He is so very grateful to us and the Mandate for allowing him to have this surgery. We were mistaken about when he had the wreck that left him cripple, instead of five years ago it had actually been twelve years. So for twelve years he has had pain and trouble walking. His therapy and healing is coming along well, he says he is so happy that he had the surgery. He has a little ways to go before he is one hundred percent, he still has a limp but yesterday at his check-up the doctor told him that because he has had the limp and uneven leg length that his hip and buttock muscles had atrophied so much that it will take a little while of walking to strengthen those muscles and be able to walk normally. On Tuesday he still had the crutch but when he went back on Wednesday the doctor took the crutch and told him he needs to walk slowly with small steps without it. He doesn’t have to go back for six months unless he has problems. When he stopped by Wednesday on the way home from the check-up he walked for us without the crutch. It has been such a blessing to see the joy in him for the gift of healing him from something he has had to deal with for twelve years. He looks so much healthier, I told him he is fat now, his face is filled out and looks so good. He laughed and laughed at that!

We told him that it is God that has blessed him, and we are His hands and feet. We explained to him that we have grown to love him and that his character and honesty and the fact we can depend on him for anything we need is what has brought that blessing to him. We continue to pray for him and wait for the day he is back to driving the tipper and we get to see his smiling face everyday!

On a side note, I am sorry I don’t get posts up regularly. Just for this post it has taken me and hour and a half just to get the picture, video clip and paragraph. With all I have to do in a day it is hard to sit down and upload pictures and write so I end up just posting our daily life on Facebook and Instagram. I do not friend many people on Facebook – mainly close friends and family. But I can be followed on Instagram at roxxiheart64!