Hope you have had a wonderful Sunday, a day of rest and a day to worship and praise our Lord!

We had an off day I guess you would say. Chris said the people in his bible study seemed like maybe they weren’t getting what he was saying. I told him not to worry about it, they were hearing God’s word and God says it will accomplish what he sent it out for. THEN I went to teach Sunday School and at the end of the story of the angel coming to Mary I asked a few questions and all I got was blank stares! There were over thirty little ones – under three, so it was loud, babies crying, Ms Betty moving them around. She is constantly moving kids from one place to another. And the older kids that were there I haven’t seen before and I think they were just there for food. They were rude to me as they left – didn’t even acknowledge when I said goodbye. But I had those words echoing in my mind that I had just said to Chris about his class! (Thank you God. Haha!) Some days are like that!

This week Raelee has been painting nails. I would say the women’s’ nails but I have seen a few guys around with green and blue pinky nails! She asked this morning if she could paint her friends nails and I said it was okay. About an hour later I walk outside and see women sitting at the picnic table. This is usually a sign someone has a problem and needs (or wants) something! They will sit there, watch us pass by doing this and that, and as soon as we go in or start on something – that is when they come! But as I got closer I saw that they were all painting their nails. Apparently Raelee had tired of it and she was in the barn helping her daddy! I had to run to keep from getting my nails glittered! The women had a ball doing each others nails, I think next time we go to Kampala we should get more polish! It seems the uglier the colors the more they like it! To each his own! 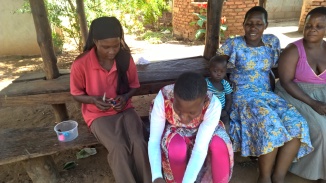 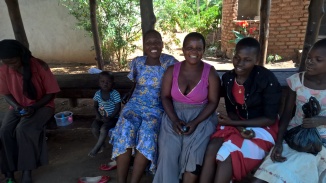 And these things we write to you that your joy may be full.  1 John 1:4

One thought on “Happy Sunday!”