Entrance to the dome house

Up into the tree! 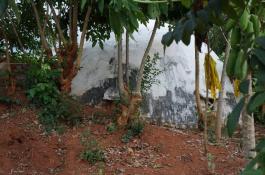 The dome house with it’s tower at the entrance was a fun place to play. And sleep? About a month ago I found a mat inside that looked like someone was sleeping or taking naps there. The kids haven’t been able to play inside the dome for a few months now because it had a big crack in the side. We have been told that it was built with uncooked bricks and mud so with that combination it was sure to fall sometime. It did. A couple weeks ago Christian and one of our workers were looking at it after one wall had finally caved in. Just as Yahaya was walking into the tunnel entrance the whole dome caved into itself. We are very thankful that Yahaya wasn’t far enough in to be hurt by all that concrete and brick falling. We are thankful too that the kids weren’t in there. Then the question was what to do after cleaning it up. We talked about building another dome house but I haven’t been all that comfortable having a place for the kids to play that was closed in and could be locked. It isn’t right at the house so I worried about what might go on in there, especially after suspecting someone has been using it to sleep. After much talk we came to an agreement on design and it is almost finished…the Queen’s Castle! The tunnel under the tree is still there so that’s pretty fun, and the turret out front has been rebuilt with a path leading over the tunnel onto another turret and the rest of the castle area. There are a couple walls still to be built but it is already a favorite place to play for Raelee and all of her friends!

Just like the turret that was there, just safer now.

The inner circle will have a ceiling and short wall for rapunzel.

One thought on “Resurrection”