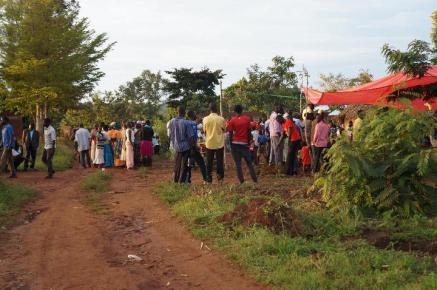 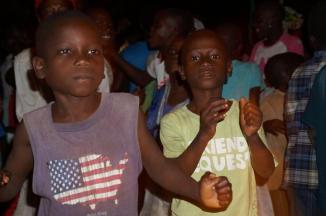 “The traditional marriage ceremony is a battle of cultural tongue-twisting between representatives of the two sides who engage each other in a question and answer challenge or in knowing, mentioning and following century old norms and traditions. Both families are required to have a spokesman to speak for them. The spokesman takes the role of the final emissary on the day of introduction and he has to pull a lot of antics learned from tradition and experience to engage or answer challenges from the other side’s spokesman.  It is the battle (friendly and of words) between the two that makes the Kwanjula and the whole ceremony memorable and unique from any other ceremony. On this Kwanjula day, little is required from the husband to be or the Son in-law. He has to say nothing on that day. Having bought everything required and dressed properly in coats and Kanzus for males Gomesis or long shawls for females, all he has to do, together with his entourage is sit and enjoy the battle between the two spokesmen.The rest of the ceremony is as interesting as the gifts (which are left outside) are brought and allocated to the different beneficiaries, and the hosts lay their demands and wishes on the new family.  Once the gifts are brought, the host’s spokesman may ask the bride and Ssenga whether they should accept the gifts. The obvious answer is “yes.” This is followed by more clapping, and more excitement. On this day of Kwanjula, the son in- law comes with rings that denote marriage. It’s at this stage that rings are exchanged and cut the cake to crown the ceremony that ends with meals.  The official church wedding takes place some few weeks or months after Kwanjula. (3)”
(excerpt from http://megan08.weebly.com/uganda-wedding-ceremonies.html)
One of our workers got married this weekend. There were only two meetings, one actually was the morning of the ceremony (after the party had started at midnight) because they hadn’t raised quite enough money yet to finish the day off! Christian was asked a week ago if our truck could be used to go “just pick up the bride’ and bring her to our village – to the groom. He said yes, he would go with our driver. Well, the party was going pretty strong, the xylophone players were playing the same beat for over 8 hours, the DJ would turn on the blaring music, competing with the xylophone. I went over a couple hours after Christian had left our house to go over (the groom lives right next door) and was told Christian would be back any minute, they had gone to get the bride. Two hours later (in total Christian and crew were gone 4 hours!) they arrived. It was dark,, so I couldn’t see anything. Wondered how we would see the service and was informed the service was performed at the brides village! Christian said it was quite the ceremony to witness. We aren’t sure if the bride and groom had met before this day, but he said the groom was sweating bullets! We left the partiers to it, and when we went to bed around 10 pm it was still going!
Another site that describes the ceremony pretty close to what Christian said went on is http://www.ugpulse.com/heritage/traditional-marriages-in-uganda-marriages-in-buganda-kwanjula/378/ug.aspx. You should read it, very interesting. The only difference is that all the bartering and gifts was done away at the bride’s home and after it was finally agreed they would marry, they went in private with a muslim cleric who actually married them. Then they and some of the bridal party were loaded in the truck and brought back to our village to the groom’s home. There, the party had been going on full force without the groom! We didn’t know this is how it all would work, so unfortunately I had to miss out on the best part! Hopefully this marriage will stick – it is the groom’s fifth! His parents decided to try their hand and pick a bride for him this time – maybe fifth time is a charm!