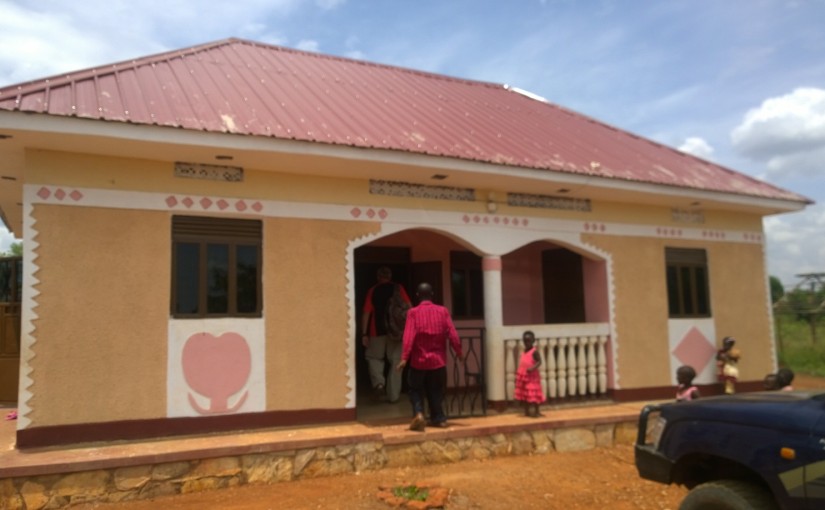 The crowd just mobbed them when they came down from their porch!

Bakali and his wife being presented from inside their home. 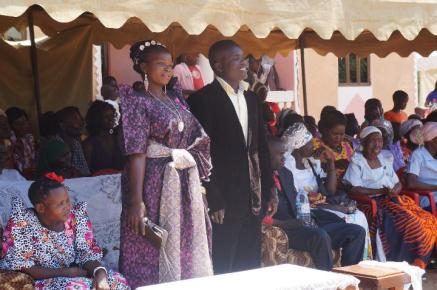 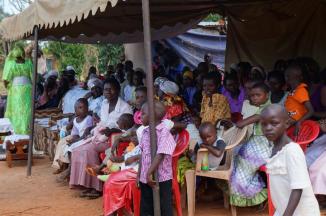 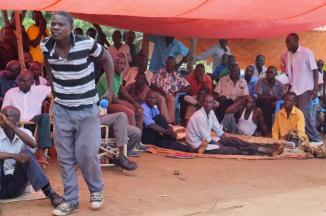 We have a worker, Bakali, who is our Farm Manager and pretty much since we got here has been Christian’s right hand man. From what we have been told, he was a pretty wild (as in native) boy when Mandate first came here. He was an illegitimate son and was pretty much shunned by many. After he accepted Christ he was shunned even more. But he is a great example of a Christ follower that, even though friends and family may leave you because of your faith, Jesus never will, and He will bless you for it. Not just financial, I believe Bakali is growing into a great and Godly man. His grandfather gave him some land and with the money he has made working for Mandate, he has saved and was able to build a house for himself, wife, and three of their own children, plus kids they take care of. It is a very big deal here, to be able to build a real house, and what we would call a housewarming party is a very official celebration! He still has plans to add on, right now he has a living room, master bedroom and two other bedrooms with plans to finish the bathroom and eventually may put a kitchen inside. (It is more common to cook outside, because if you do not have a stove, and many don’t, then you cook over fires so…)

It started with the very special invitation. Three of us got the very special one – Wes, The Chairman, and Us! Then, there were the meetings. I didn’t attend, but Christian did and said they were quite the deal! The Chairman came, and there were lists- supply lists, everyone had a place to participate in, a job to do at the party. There were prices by everything on the lists, from the food, the tents, make-up (? that was weird), clothing, photographer…it went on and on. A couple million shillings or more, somewhere between 600-800 USD. So everyone present, who we found out were mostly family and friends, was supposed to chip in and pay for something, and if it didn’t all get settled the first meeting, then there was a second, then a third and finally there was enough money!

The very special invitation said the party would start at 12 AM. Yes, that’s midnight – I haven’t partied that late in, uh, lets say many many years! But Christian was told his job was to say opening prayer. Okay. He went, pitch dark, music playing, a few people dancing in front of the only truck with parking lights on. He sat about an hour, asked about Bakali, finally left! Get a call in the morning to be there to say opening prayer at “exactly about 10” (that’s exactly about how it goes with everything!) So we went at 9ish. By 12ish Raelee and I left to go find food. Went back. About 2 I am given notice that I now have a job – photographer, and from what I could gather there were 3 very important pictures I was to take but I had no idea whatsoever what those 3 were to be of. I had been taking pictures and videos all day, there were xylophone competitions and dancers. So at exactly about 3, Bakali and his wife came out of the house. I have never seen this guy so serious. Really, he is always laughing and carrying on, but he did not crack a smile. Everyone mobbed them and then they all danced and sang and went around all the tents with all the people sitting, watching. I took alot of pictures, but I was done about exactly 4 so I went home, yes, abandoning my poor husband. He came home about an hour later and said he had made a little speech and asked if his job was done and when told yes, he scooted. I am pretty sure I missed one of the 3 very important pictures…the cutting of the cake, but I can say I did take a pic of the cake, just didn’t realize I was supposed to take one of them cutting it.

We are very happy that we and also that The Mandate had a part financially, and spiritually in this great event in their life and wish them many happy years in their new home!

Today, Bakali came by the house and I showed him all the pictures. He loved them so much. I told him “You were so serious Bakali, I am not used to seeing you so serious. You and Fatima looked like adults on that day” He laughed so hard at that, but I think the fact that they are so young – he is 26 – and already able to get a house made it an even bigger deal. He says is was fun, but too much work and he does not think he will ever have another party like that. I told him, you just wait until the daughter grows up! He put his hand over his face and said “Nah!”

5 thoughts on “The House Party”