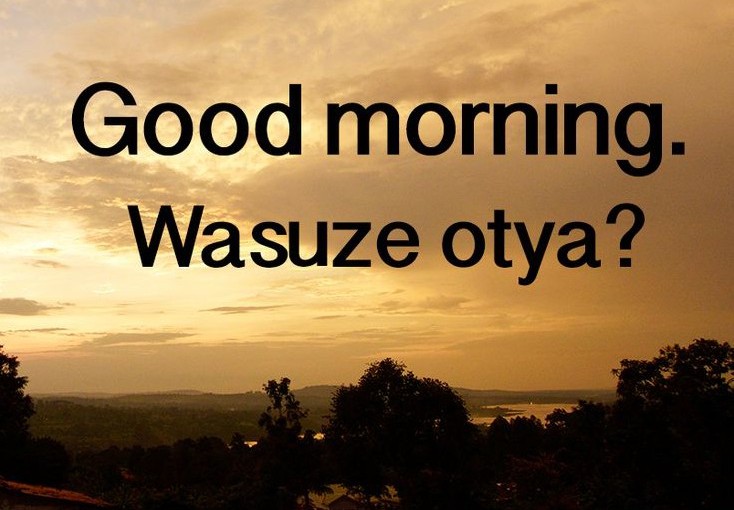 The language spoken here is Lusoga. We are trying to learn, and most are eager to help teach us. There are quite a few that speak some English, but with their accents it is sometimes confusing. I was introduced to a man in our home who I understood to be the witch man, the “witch doctor” of the village. I said hello, and then he left. A little later, that man was outside and someone else introduced him as our night guard. So, understandably, I was a little concerned that the village witch doctor was walking our grounds at night. Finally, one of the girls that has been a great friend to us was sitting outside, she was the one that originally introduced this man in the house. I asked, so Bugari is the witch man? She said “Yes, the witch man” and I said “He is our night guard also?” She said “Yes, he is the witch man” “Witch man, like witch doctor?” And with that she laughed and laughed and said, “No, WATCH man, he is not the witch doctor!” And so it goes sometimes, I misunderstand and they laugh at me and correct me. I thought they needed math books when they were telling me what they would be needing to cook lunches for our workers. Finally, they made the motions of striking a match and I got that they need matches, not math books. That went over very well!

So here are some of the words I’ve learned so far:

Learning the language is good, and helpful, but we also have to learn how to greet and how to answer. People come to the door and say kaale and I say kalibu and then they come in and say “Welcome Back” even though they are the ones coming here and I haven’t been anywhere. Or they say “How is here?” and we say “It is good, how is there?” Or they thank us for things we are doing in our own home, like the painting. “Thank you so much for painting, well done”! It’s funny. After they come in and ask “How is here? How was your night? How was Christian’s night? How was Raelee’s night?” they will leave. Later, they may come back and it is the same thing over again!

You don’t just go up to someone to ask a question, as in getting directions to somewhere. You have to ask how they are doing, how is here, nice to see you….THEN you can ask your question. Do not be in a hurry, greetings are very important here. I’m sure we seem rude sometimes, we are so used to just getting to the point of the matter, and I know we will entertain alot with our misunderstandings, but all in all, most people are very gracious to us and patient. Our prayer everyday is that God will give us better understanding and the ability to speak with them in their language.

Christian wanted to meet our workers, so a meeting was called. The Chairman of the village was also invited to sit in. There are 12 workers in all, and 11 were there. They aren’t full time, some work on this project or that project. When Christian explained the project he would be starting this week, one spoke up and asked to be paid everyday. Christian told them he would pay when the project was completed and mayhem broke out. We had an interpreter, but at this moment she didn’t interpret all that was being said, and it was very animated, raised voices, hands flailing everywhere. This went on for about 20 minutes, I looked at Christian and said, “I didn’t know they thought they would have any in-put on how we paid them” and Christian replied “they can talk and debate all day, but the decision is the same!” Finally the interpreter looked at us and said “They are debating on what will be served for lunch each day”! We were really wishing we knew what they were saying in all this – the meeting lasted about an hour and a half, and we knew very little of what was being said. At the end they thanked us for being here and that they were grateful for the work we provided. And I thought they were getting ready to kick us out!

So much to learn, and most days it is fun learning. Some days it is tiring, but every night we three thank God that He thought of us to send on this adventure!